Abstract: Solid-phase extraction (SPE) columns packed with materials based on molecularly imprinted polymers (MIPs) were used to develop selective separation and preconcentration for Ni(II) ion from aqueous solutions. SPE is more rapid, simple and economical method than the traditional liquid-liquid extraction. MIPs were used as column sorbent to increase the grade of selectivity in SPE columns. In this study, we have developed a polymer obtained by imprinting with Ni(H) ion as a ion-imprinted SPE sorbent. For this purpose, NI(II)- methacryloylhistidinedihydrate (MAH/Ni(II)) complex monomer was synthesized and polymerized with cross-linking ethyleneglycoldimethacrylate to obtain [poly(EGDMA- MAH/Ni(II))]. Then, Ni(H) ions were removed from the polymer getting Ni(H) ion-imprinted sorbent. The MIP-SPE preconcentration procedure showed a linear calibration curve within concentration range from 0.3 to 25 ng/ml and the detection limit was 0.3 ng/mI (3 s) for flame atomic absorption spectrometry (FAAS). Ni(II) ion-imprinted microbeads can be used several times without considerable loss of adsorption capacity. When the adsorption capacity of nickel imprinted microbeads were compared with non-imprinted microbeads, nickel imprinted microbeads have higher adsorption capacity. The K-d (distribution coefficient) values for the Ni(II)-imprinted microbeads show increase in K-d for Ni(II) with respect to both K-d values of Zn(II), Cu(II) and Co(II) ions and non-imprinted polymer. During that time K-d decreases for Zn(II), Cu(II) and Co(II) ions and the k' (relative selectivity coefficient) values which are greater than 1 for imprinted microbeads of Ni(II)/Cu(II), Ni(II)/Zn(II) and Ni(II)/Co(II) are 57.3, 53.9, and 17.3, respectively. Determination of Ni(II) ion in sea water showed that the interfering matrix had been almost removed during preconcentration. The column was good enough for Ni determination in matrixes containing similar ionic radii ions such as Cu(II), Zn(II) and Co(II). (C) 2003 Elsevier B.V. All rights reserved
Template and target information: nickel ion, Ni(II) 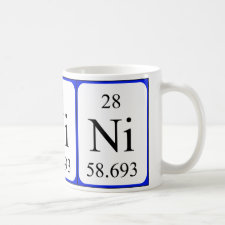