Abstract: Chemical sensor based on molecularly imprinted conducting polymers (MICP) is described. Polythiophenes - acetic acid thiophene MICP films with different thicknesses have been electrosynthesized over the sensing area of an original electrochemical surface acoustic wave sensor (ESAW). To investigate the sensing properties of the developed sensor, electrochemical and gravimetric combined transductions have been applied to atrazine (ATZ) detection. Films of poly(3,4-ethylenedioxythiophene) noted PEDOT as well as non imprinted conducting polymers (NICP), were also prepared, in order to lead a comparative study. The structure of all films was investigated by IR spectroscopy (ATR-FTIR) and atomic force microscopy (AFM). Films growth and their doping/undoping processes were investigated by simultaneous gravimetric/electrochemical transduction. Real time measurements highlighted difference between the two polymers electrosynthesis kinetics. MICP and NICP films grow linearly with time, whereas PEDOT film thickness presents a limit value of 1 μm in the implied conditions. Considering ESAW sensor response towards charge ''transfer'', a linear relationship between sensor phase variations and charges density have been found for PEDOT film, with a sensitivity of about 470 ° C-1 cm2. The same sensitivity can also be considered for MICP and NICP films up to 200 mC cm-2. Beyond this value, saturation has been observed. This divergence have been attributed to difference in films thicknesses, which led to values of weight ratio MICP (NICP)/PEDOT included between 3 and 4.6 for electropolymerization duration going from 10 s to 30 s. Combined use of electrochemical and gravimetric transductions, using MICP as sensitive layer, have also been considered to highlight the ability of the developed ESAW sensor to detect the specific recognition of polymer functional cavities towards ATZ molecules
Template and target information: atrazine, ATZ
Author keywords: molecularly imprinted conducting polymers (MICP), ESAW, Gravimetric detection, electrochemical detection 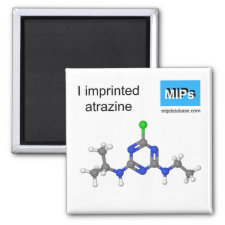